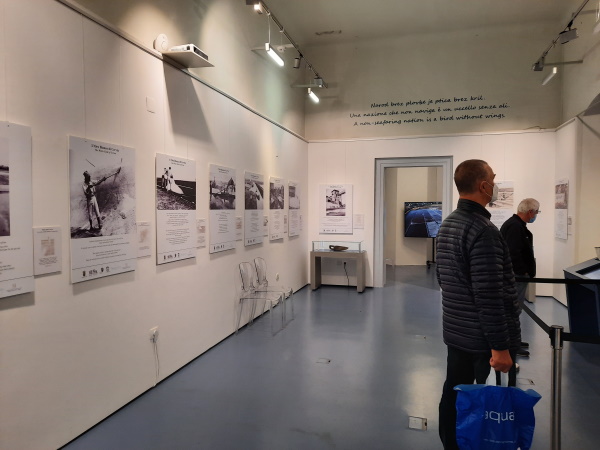 It was inaugurated in the presence of the mayor Genio Zadković at the Pomorski muzej-Sea Museum "Sergej Mašera" of Piran. The exhibition is composed of 20 panels measuring 70x100cm that narrate a journey through the history of the salt pans and of the work of man, activities in the artisan salt pan and in the mechanised salt pan.

The exhibition, with texts in Italian, English and Slovenian, taken also from the traditions connected with salt, production, the role of the woman and family, describes the birth and development of the museum and describes several educational activities that MUSA conducts with the schools. The panels tell of the old spa facilities and the major traditional events of the town such as Sposalizio del Mare and Cervia Sapore di Sale.

The exhibition, hosted in the display rooms of the Sea Museum of Piran, includes giant posters of the Camillone salt pan and of the mechanised salt pan, as well as film clips of our salt pans and the museum. Many old photos also bear witness to the work, transport and storage of the salt in the warehouses.

Inaugurated in the presence of the mayor of Piran Genio Zadković, the director of the Sea Museum of Piran Franco Juri, Matjaž Kljun of the Institute for the protection of cultural heritage in Slovenia, Vinko Oblak, expert on maritime issues, Janez Mužič, journalist and Flavio Bonin, collaborator of the Sea Museum, the exhibition will remain open to the public for a few months.

In 2021, images of the salt pans of Sicciole – Piran will be hosted in an exhibition at MUSA in September in conjunction with the traditional feast of Cervia Sapore di Sale.

The relationship of MUSA with the Sea Museum of Piran comes from the Association of the Maritime Museums of the Mediterranean (AMMM) that MUSA joined 3 years ago. Each year, it comes together in a city of one of the associated museums for an annual international conference on museum themes. This year, the meeting scheduled to take place in Barcelona was held online due to the current issues and handled the theme of the difficult situation of museums during closures and re-openings due to the pandemic underway.

“The exhibition set up in the Sea Museum of Piran bears witness and makes the excellence and typical features of our town known in an international context - declares the Culture councillor for the town of Cervia Cesare Zavatta- Not just salt, the product for which Cervia is universally known, but also significant places and strong identity traditions are illustrated with a multimedia and comprehensive approach. We thank Piran for the opportunity and the hospitality, committing ourselves to doing likewise on the occasion of the event which MUSA will host in 2021, within the scope of a relationship of reciprocal collaboration formalised by joining the AMMM”.